Compound. 2 1/2" + 4" X 3"
Built 1990 by J.V. Hodgkinson
Design: 6A by: Stuart Turner
pv on HP, sv on LP valve. SLRG with ‘Marine links’ to owner’s design valve gear.
2 tfc, 2cbs, 600 rpm. A standard 6A with modified crossheads to accept motor cycle con rods. Pressure lub to mains; big ends, crossheads/ guides and into steam. Fitted with a proper simpling valve which diverts H.P. exhaust to condenser and puts live steam to L.P. sv on both cylinders prior to 2006

Built 1988/89 from a Rupert Latham moulding and hull kit. Launched March 1989. Originally fitted with ‘Swan’ engine and an ‘Illingworth’ boiler from ‘Finch’ built by Raymond Vallings. Re-engined winter of 1990/91 with a Stuart 6A built by owner. Steamed every year since launch. Re-boilered winter of 2003/4 with a VWT boiler similar to ‘Illingworth’ but with coiled generator tubes and a ‘Water Wall’ designed and built by owner. Externally indistinguishable from the original. Taken to France every Summer since 1990 where she has steamed more miles than in U.K. Has only failed to get home under her own steam on one occasion. 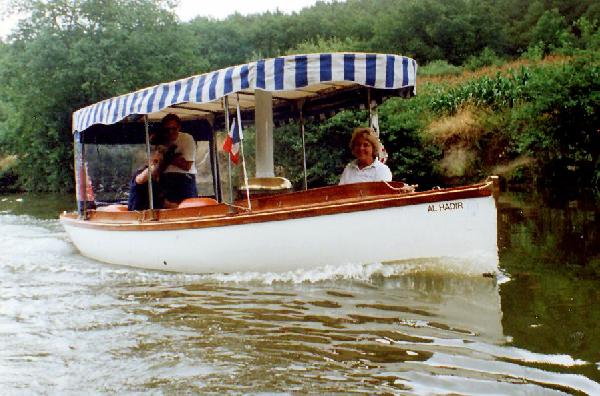