Status: Fettling needed - Not yet had time to work on it

Hull acquired 1974 by D. C. Burnage, restored and re-ribbed at Bedford, steam fitted 1975-6, re-launched July 1976. Acquired by T. D. Casey July 1977. Ref Funnel 12. Acquired by V. Norman March 1987. Laid up 1998-9. I acquired Allison Marie from Mr Vic Norman in November 2008. She had been decommissioned as the engine and boiler had been removed and stored in-doors, however, the hull had been left outside at Rencomb Airfield near Cirencester, and therefore as a result of exposure to the elements she had suffered some deterioration. Between late 2012 and mid 2015 Kevin Halcrow of Lakeland Wooden Boats undertook a number of repairs to the hull. These included repairs to the transom top, replacing a 10ft section of shear plank, sections of the gunwhale, various sections of planking, fore and aft sections of garboards on both sides, removal and replacement of front sections of the keel and hog. All seams were raked out below the waterline and re-caulked with cotton and polyurethane sealant whilst seams above the waterline were splined with mahogany. Work has now commenced on fitting the steam plant and extending the prop shaft to suit the engine's new location. 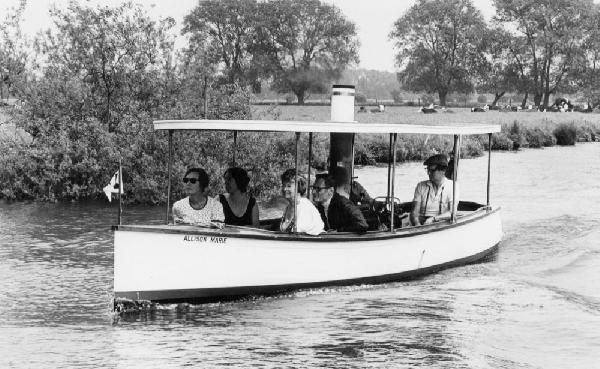