Built as Admiralty Cutter No.438, appropriated to HMS ESPIÈGLE, then hospital ship HMHS MAINE. With the Maine she was used to support British troops in both the Boer War (Durban & Capetown) and the Boxer Rebellion in China, then based for many years in the Mediterranean. Shortly before war was declared in 1914 the Maine was wrecked on Mull on the west coast of Scotland. S.C. 438 was recovered and sent to Portsmouth Dockyard. She was decommissioned in the 1920s and converted to a motor cruiser. c1974 derelict hull acquired by Dr Roger Stevens, repaired and new steam plant fitted c.1987, though not as original. Acquired by Peter and Tim Hollins 1999. Original design drawings, specification and steam trial records found and cutter restored by owners to original configuration. Engine replaced with one identical to original, at the Maritime Workshop, Gosport. Cutter recommissioned Portsmouth Harbour 2008. Now based at Boathouse 4, Portsmouth Historic Dockyard. 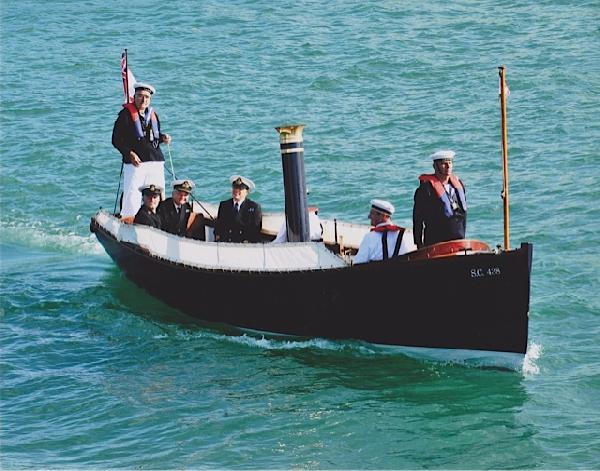